The Birth of the Prophet Muhammad ﷺ 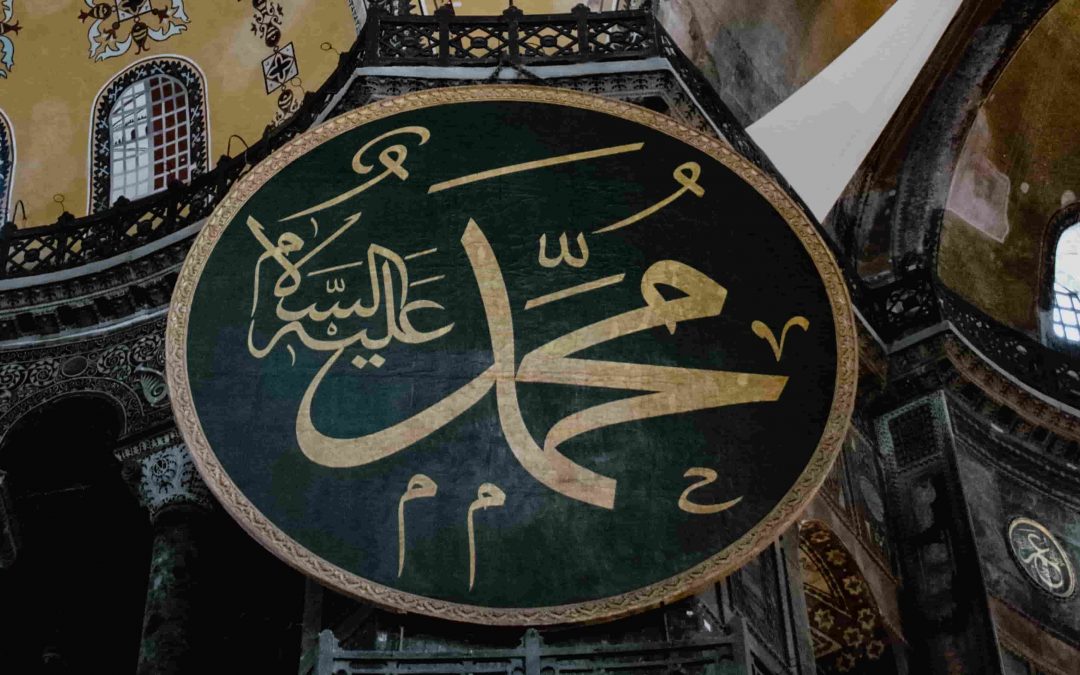 “There has certainly come to you a Messenger from among yourselves. Grievous to him is what you suffer; [he is] concerned over you and to the believers is kind and merciful.”

Born on an absolutely distinguished day, in the lunar month of Rabīʿ al-Awwal, he filled the world with a light that still continues to pierce darknesses. The fabric of reality changed in an irreversible way, the best of creations was brought to this earth to set straight the course of mankind and reveal to us the words of guidance from our Creator.

On a radiant Monday night, more than 1,000 years ago, a pure and chosen expecting woman named Āminah ibn Wahb gave birth in the Year of the Elephant. The Hadith master Bayhaqī transmits via his chain back to ʿUthmān ibn Abī al-ʿĀṣ, who said:

“My mother narrated to me that on that very night, she witnessed Āminah ibn Wahb give birth to the Messenger of Allah ﷺ. She said, “Every single thing I laid my eyes on inside the house was illuminated. I would notice the stars drawing so close that it would seem as if they were about to collapse upon me.”

In addition to this, we learn of other miraculous events that took placed as his blessed soul entered our realm ﷺ, Makhzūm ibn Hāni’ al-Makhzūmī, via his father – who was already 150 years of age – narrated that:

“On the night in which the Messenger of Allah ﷺ was born, the palace of Khosrow shook vehemently and fourteen of its ornaments fell; the Great Fire of Persia died after it had been burning continuously for a thousand years; and the river of Saveh sank into the earth.”

Later, we learnt from an authentic narration that our Beloved Prophet ﷺ said when asked about fasting on Mondays:

“That is the day on which I was born and on which I started receiving revelation.”

Further to this, we learn from Ibn Abbas:

From the early days of his blessed life ﷺ there were miracles taking place around him, as if reality itself was forming and reforming in his presence. The historian Muhammad ibn Isḥāq noted that our Beloved Prophet Muhammad ﷺ was placed on the ground when born and he prostrated to Allāh. According to customs in Mecca during that age, women placed a cooking pot over the infant Prophet ﷺ but the pot moved away from him and the women saw him lying on the ground, gazing at the sky, completely serene.

During a feast that took place one week after his blessed birth, the Quraysh asked his ﷺ paternal grandfather ʿAbd al-Muṭṭalib ibn Hāshim about the name of the newborn. He informed them that the name of the newborn would be Muhammad (ﷺ), to which the tribesmen questioned why familial names had been avoided and ʿAbd al-Muṭṭalib replied that he had chosen the name Muhammad (ﷺ) because he “desired for Allāh and His creation to praise him in the heavens and the earth.” It has been said by some scholars that the grandfather of the Muhammad (ﷺ) had been divinely inspired to choose this name.

As he got older, he grew in beauty and excellence. Long before prophethood, he was already special among his peers. There was something about him that was mesmerizing for all that knew him ﷺ. Truly, our language cannot do justice to the beauty and exemplary character of our Beloved Prophet ﷺ. After all, how can someone find the words to praise the one that God Himself has praised in His Book:

“and indeed, you are of a great moral character”

We learn much about his appearance from the Ash-Shama’il Al-Muhammadiyah. He ﷺ was of a medium build, not exceedingly tall nor too short. He was not purely white nor entirely black. His hair was not too curly nor was it completely straight. When he died ﷺ, having passed the age of sixty, he had less than twenty grey hairs on his head and face. He ﷺ had a large head and a round face. He had jet- black eyes, long eyelashes, cheeks that were not elevated at the cheekbones, a wide mouth, and a thick beard. His face was like the full moon when it shines at night ﷺ.

He ﷺ had the seal of prophethood between his shoulder blades; it resembled the button of a curtained canopy. He had broad shoulders. His hair would reach his shoulders and at times it would be short, reaching the middle of his ears. Initially, he would let his hair loose but then he began to part it. His shoulders, forearms, and upper chest were hairy. He had long forearms and wide palms. His hands were somewhat thick with thick fingers. His stomach and chest were level. He had a beautiful body which would radiate and glow. His heels were not too fleshy. He walked as though he were descending a declivity, as if the earth was made easy for him ﷺ.

With regard to his clothing, he ﷺ would wear whatever was available. He was fond of gowns, wraparounds, cloaks, and both nomadic and Yemeni mantles. At times he would wear a topcoat as well as tight-sleeved coats. He ﷺ also wore turbans that had a tail and those that could be wrapped around the face. He would not go out of his way for clothes or food, nor would he avoid that which was permissible for him.

The Character of the Prophet ﷺ

His ﷺ bravery and honourability were consistent, inspiring and intrinsic to his being. His companions would said of him that:

“When things intensified in battle, we shielded ourselves behind him ﷺ.”

It is said that people had so much faith in Prophet Muhammad ﷺ that they would advise one another to seek his services when needed. They would say: “If you want to entrust your wealth for safeguarding, entrust it to this trustworthy, honest man, for he will never touch it. If you look for someone who never tells a lie and never breaks his word, go directly to Muhammad, because whatever he says is true.” He was generous in a way where he placed the wellbeing and ease of others before his own ﷺ.

ʿĀ’ishah was asked about the character of the Messenger of Allah ﷺ. She said:

“His character was the Qurān.”

By this, scholars have understood that he ﷺ embodied the commands of the Qurān in such a way that whatever it instructed, he did and whatever it forbade he refrained from. His life was a testament to the excellent characteristics and beautiful traits that are pleasing to Allāh. These included: truthfulness, reliability, generosity, maintaining kinship, mercy, bravery, obedience to Allāh at all times, justice, striving for knowledge and sharing the message of Allāh, eloquence, fairness, humility, cheerfulness and hopefulness, sincerity and grace.

The Prophet ﷺ, the Messenger of Allāh, Mohammed Ibn Abdullah, Ibn Abdul Mutalib, Ibn Hashem is the seal of Prophets chosen by Allāh to be the one that has the heart upon which Qurān descended. Simply put he was one of a kind, the best of character and the mercy our world needed as it had fallen into darkness. He had tests that we are not able to comprehend. He never met his father and his mother too passed away while he was young ﷺ. He was called a madman, a liar and he was abused while he tried to share the truth with others. Yet he never let the mercy in his heart decrease, his kindness and genuine concern for the condition of Mecca at the time shaped his mission.

As the ummah of the Noble Prophet ﷺ, we must take the responsibility to study his life, learn from his teaching and strive to emulate his character ﷺ. After all, he is loved by Allāh and through him, we too can be among those that are loved by Allāh. [Learn practical tips for self-improvement from the Quran here.)

A few things to takeaway:

The Prophet’s mercy was vast and inclusive. He spread it far and wide to the point that even animals could find refuge in his kindness. Of the many instances that are breathtakingly vibrant with the clemency of the Prophet is that of the helpless bird. ‘Abdullah ibn Mas’ud was traveling with the Prophet and a few other men. One of the men took an egg from the bird’s nest. Out of despair, the bird came and flapped its wings at the Prophet, and he took immediate notice of her sad state. He turned to his companions and asked them who had made this poor bird miserable. Upon finding out that her egg had been taken, he ordered the man to return the egg to her as a sign of mercy and compassion. At a time when many humans were not being shown kindness, the Prophet mastered kindness to mankind and was already encouraging kindness and rights for animals

May we be among those that follow him, continue his mission and be reunited with him in the hereafter ﷺ. He ﷺ loved us with such a unique love that he saved his ultimate supplication for us:

“For every Prophet there is one invocation which is definitely fulfilled by Allah, and I wish, if Allah will, to keep my that (special) invocation as to be the intercession for my followers on the Day of Resurrection.” [Bukhari]

He ﷺ never forgot about us, he prayed for us in every prayer:

“Aisha (May Allāh be pleased with her) said: (One day) as I was seeing the Prophet ﷺ in a very good mood I told him: “O Prophet of Allāh, pray for me.”

So he (made the following supplication for her): “O Allāh forgive all of Aisha’s previous shortcomings and future ones, the inward actions and the outer ones.”

Aisha said: “I smiled, was so joyful and laughed to the extent that my head dropped on the Prophet ﷺ’s lap.”

So he said: “Are you happy because of my supplication?”

She replied: “And how can I not be happy with your supplication?”

Then he said: “I swear by Allah, this is a supplication I make for my ummah, my followers, in every single prayer.” [Saheeh Ibn Hibban]

Allāh chose to bless us with the deen that is Islam then he gave us guidance with The Qurān and he showed us how to live in the most excellent way through His mercy by sending us Prophet Muhammad ﷺ. To know him, know his life and to implement his teachings and ways is the duty of a Muslim. But more than that, it should be something every Muslim cherishes and is grateful to be able to do so.

Know that someone loved you, prayed for you, cried for you and your imaan and protected you years before you were even born. He was considerate of your situation and your hearts and spent each day spreading the truth which we now have in our everyday lives – Anas ibn Malik reported:

“The Messenger of Allāh ﷺ said, “I wish I could meet my brothers.”

The Prophet’s companions said, “Are we not your brothers?”

The Prophet said, “You are my companions, but my brothers are those who have faith in me although they never saw me.”

May we all commit to learning about Our Beloved Prophet ﷺ, may implementing his sunnah be essential to our lives and may we continue to learn and spread the Noble Message that he was sent with.