The Meaning of Nafs 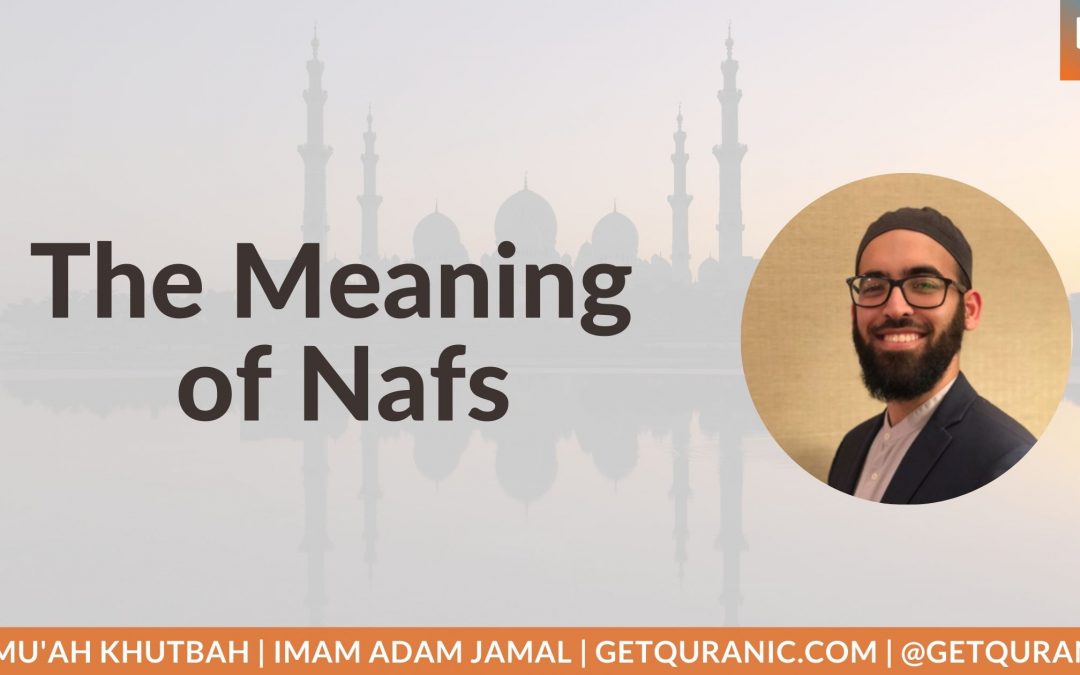 Seek refuge in Allah from Satan, the expelled.

He has succeeded who purifies it,

And he has failed who instills it [with corruption].

My dear brothers and sisters, it was a saying of the elders of the scholars attributed to the Prophet.

The one who knows themselves, knows their Lord.

O you who have believed, fear Allah. And let every soul look to what it has put forth for tomorrow – and fear Allah. Indeed, Allah is Acquainted with what you do.

He says be mindful of Allah, and every nafs, every self should search for what they will bring forward on the Day of Judgment. Be mindful of Allah because he knows what you will do. He is well-informed of everything that you do.

And don’t be like those who forgot Allah and as a result, they forgot themselves.

He made them forget themselves. When we forget Allah, we become lost. We are made to forget our own selves. What are we actually doing? How are we actually spending our life? So it’s even more important to understand ourselves. That’s what I’d like to talk about today.

The other force is the Ruh, the spiritual force. That spiritual force predates the physical one. Allah tells us in the Quran that all the souls are gathered together and were made aware of the oneness of Allah and the Lordship of Allah. And after the Ruh leaves that physical body, then the physical body is dead. It returns to the dirt. But the spirit continues, the Ruh continues to its next phase.

We live in a society that is increasingly irreligious and we also live in a society that is increasingly more sad, more depressed, more lonely. There is a connection between these things. Mental health is real, no denying that, but a part of that is the spirit that needs to be fed and nourished. So these two competing forces, the physical and the spiritual, what is their relationship and how do they evolve within our lifestyle?

The first type of nafs that is mentioned is the inciting nafs, the commanding nafs. “I want this. I want that. I have to have it now today. Make the order. Pre-order it today. So I get it first day arrival. I have to have it now.” That’s nafsul-ammarah. Where is this mentioned? In the story of Yusuf (as) when the wife of the Aziz attempts to seduce Yusuf. And Yusuf mentions this weakness of men, of human beings, and he says that the nafs is an inciting and a commanding force. And that is the physical realm. That is the physical body inciting and commanding for its needs and its desires to be fulfilled, no matter the qaum.

Sigmund Freud even talks about this. As you are born, which is the selfish part? You might see the behavior of a toddler – how does the toddlers keep snatching from their younger siblings? They want everything- “mine, mine, mine…” This spirit is not used to this physical body. It’s getting used to it. It’s an immature spirit. It’s just come into the body. Of course it will be fully controlled by nafsul-ammarah, by the commanding self, by the inciting self, the self which wishes to claim, no matter the class.

Then the nafs evolves and begins to realize. That is where we have the nafsul-awwama – scolding nafs, the blaming nafs, nafs of reproach. You do something and then you feel bad about it. You feel guilty. We call it our conscience. My conscience is telling me this. My conscience is telling me that’s nafsul-awwama and that is where most people are. They don’t give in fully into the animal side, the physical side, and they have a connection to the spiritual side. They’re in-between those two.

Then the last evolution is the one which is mentioned in Surah Al-Fajr, when Allah addresses those that are entering paradise. He says:

Come back to your Lord now, fully pleased and fully content and fully satisfied.

And enter among My [righteous] servants, And enter My Paradise.”

This is to those who have been able to subdue the physical and been able to become content and to be fulfilled and to be satisfied. They’re not simply reaching for the next thing, but they’re content with their place in the world. Something which we seek, but which we are afraid of.

So, how do we get there? You can look at these three stages in a cynical way. You can plot them on a bell curve. I can say that there’s one group that is extremely focused on the physical, and then there’s the majority, which is the guilty – those that feel guilt when they do wrong. Then you have those on the other end, which are content where the spirit is satisfied.

But that’s a cynical way to look at it, because you say, “Well, I’m just part of the majority. Let me just concede, let me forfeit, let me surrender to where I am at.” But instead let’s look at the metaphor that Allah has given us for our journey.

His mercy and His compassion is repeated.

And what is the means? The means by which we are on that journey.

You alone we worship , You alone we seek help from. That is the means of this journey. That every step of the way we’re engaged in that worship, in its broader definition. And we’re seeking help from Allah on that journey –  اهْدِنَا الصِّرَاطَ الْمُسْتَقِيمَ ‎

We’re not alone on this journey, but rather there have been those who have been on this path before. So don’t feel like you’re going at it alone.

We also have the examples of those who are not on that path or who were, and then came off of that.

That’s where we have to evolve past just the physical. Because the Salah is a combination of the physical and the spiritual, and that’s what makes us afraid of the Salah.

We had a conversation last night about scholarships. For many people, they don’t apply because they’re afraid they won’t get it. They’ll say, “It’s waste of time.” But if everyone thinks that, then no one applies and no one gets it. They say, “we’ll just be applying, you are gaining benefits.” You’re applying to this scholarship. You’re getting the benefit of knowing how to apply for a scholarship and how to represent yourself and so on. And just by being in that position, you are starting on that trajectory. It’s the same with your prayer, my brothers and sisters.

Maybe we are afraid that we’re not achieving the spiritual goals of our prayer, but we have to come in with that fear and we have to put it out on the table and we have to be honest with Allah of where we are at and we cannot pretend. When we are able to come to the prayer with that truth, with that honesty, and that is where it will begin. That is where that process will begin to bear fruit. We don’t worry about the rest of everything, but we worry about where we are in this moment so that we can begin to nourish the spirit and that spiritual aspect, which we need today more than ever. So I ask Allah that He helps us to do that, that He helps us to bring the Ruh into our physical and to fulfill and nourish the spiritual side of ourselves. Ameen.

I wanted to mention what sparked this topic. With 9/11, the 20th anniversary being in 2021, I was reading about this Mauritanian man who memorized the Quran. A young boy, and one who happened to be in the wrong place at the wrong time. He was detained in Guantanamo bay with no charge- detained indefinitely. Where the CIA would come and practice their enhanced interrogation techniques on him, which is another way to say all kinds of torture, all kinds of physical torture. He was there for 14 years, and they finally released him in 2016. Again, admitting that there was no charge, no evidence. They were holding him hoping for something to come up. But anyway, during his time in Guantanamo, he wrote two books.

One of those books was about his time in Guantanamo, and the other one was how to find happiness in a hopeless place. When he came out of Guantanamo, in many of the interviews that he did, he said, “I forgive everyone. I forgive all of the captors, the torturers. I forgive everyone.” But to be so apart from his physical self and to let his spiritual contentment take over, how do you get there even though your physical body has been through so much? That book that he wrote was turned into a movie and was released in 2020.

Not only that, but the guard who was watching and standing outside of his cell, became his friend and converted to Islam and they haven’t given him his passport in Mauritania. The guard actually visited him in Mauritania, even though they took 14 years of his life away from him. Think about that, my brothers and sisters, and think about how we can achieve that contentment and not become stuck simply in the physical side of our nafs because the physical side is just one part. So I ask Allah to help us to do that.