The Process of Seeking Forgiveness 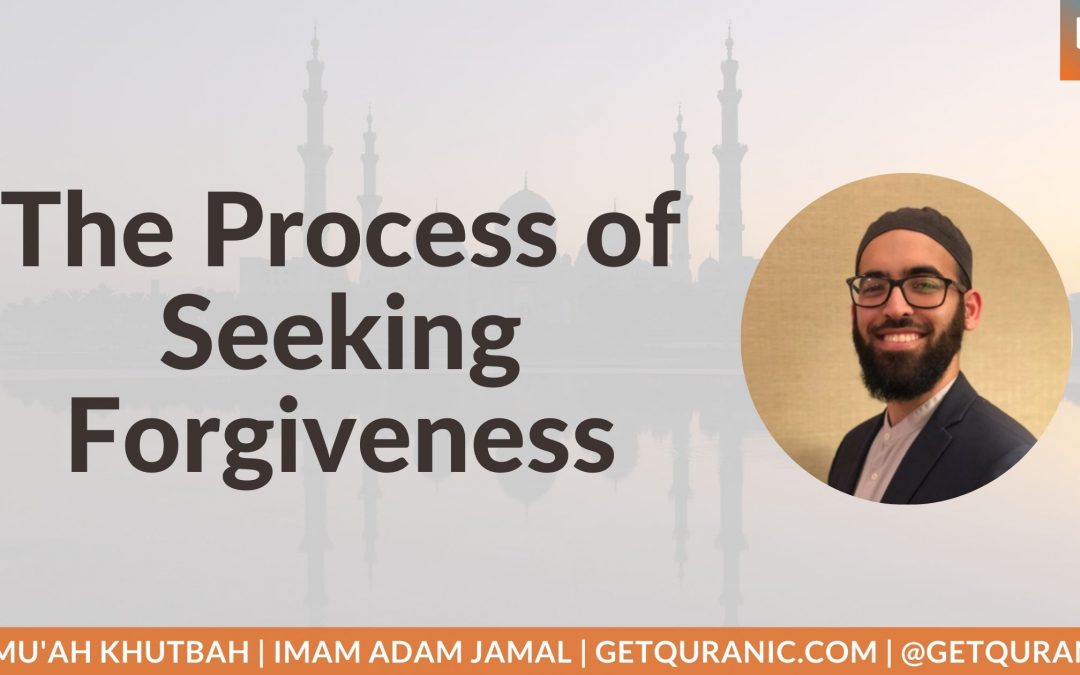 And hasten to forgiveness from your Lord and a garden as wide as the heavens and earth, prepared for the righteous

All praises are due to Allah for blessing us with the greatest blessing of all and that is of Imaan. That is of our belief in Him and guidance from Him in the form of His book and the message of His Prophet Muhammad (pbuh), who not only did he bring this book to us, but he showed us how this book must be applied in our lives.

Allah says in the Quran:

“Hurry to forgiveness from your Lord.”

Allah tells us “to hurry and to rush and not delay”. What does it mean to hurry to something? Does it mean you tell yourself ‘maybe tomorrow’? If you are suffering from pain, you go to the urgent care. You cannot delay. If you delay, you don’t know what’s going to happen. There must be something wrong. Rush to Allah, hurry to Allah, don’t delay, don’t find excuses. Don’t look for other things to do. And rush in a hurry to Paradise. What does it mean to rush and hurry to Paradise? It doesn’t mean to bring your death forward. Of course not. But it means to take the path to Paradise, hurry, and rush to the path to paradise.

That path to Paradise and that forgiveness, who is it meant for? Allah says – “لِلْمُتَّقِينَ” – for those who have the Taqwa, for those that are conscious of Allah. Many of us, when we hear ‘مُتَّقِينَ‘, we might say to ourselves, “but are we really people of Taqwa?“ Okay will we really be or really fall under that label of being مُتَّقِينَ ? It seems like such a huge label, such a huge thing to live up to and how can we ever get there? And Allah lays it out for us in a very beautiful way in this passage from the Quran. What does he say about لِلْمُتَّقِينَ ? How are they described? It’s very important. Every single piece of this description. Every single characteristic of لِلْمُتَّقِينَ is very important. So let’s take a look.

Allah says: “Those who spend in good times and in bad times, they spend in the way of Allah.”

“Who spends [in the cause of Allah] during ease and hardship and who restrain anger and who pardon the people – and Allah loves the doers of good.”

Al-Muttaqeen have consistency in their life. They don’t let the fluctuations of the dunya, the fluctuations of the world, impact their generosity. That generosity could be in many forms, of course. It could be through time, money, other resources, other things that you have, the influence that you hold, the power that you hold the risk, which Allah has given you, the people which He has put into your life. Al-Muttaqeen are generous with those things, whether times are good or bad. They don’t let bad times make them go back into their shell. They don’t say, “Oh! It’s bad times now. I can’t do anything”. Al-Muttaqeen try to remain consistent in the good times and the bad.

So, what does it mean to be conscious of Allah? It means that good times and bad times do not affect our God consciousness. You might say it’s easy to be God conscious in good times when everything is going well. But when bad times come, that’s when our character is tested. Are we able to be consistent in that way? Are we able to maintain that Taqwa? Are you able to maintain that remembrance of Allah, even in difficult times?

The second thing about Al-Muttaqeen, which is achievable, my brothers and sisters, is those who control their anger. What are the times when we get angry and how do we retaliate? How do we react when we become angry? Are we able to control our anger? وَالْكَاظِمِينَ comes from the word that means to swallow – it’s erupting. The anger is erupting the actions and the reactions are erupting and we must swallow it. You might be generally a very calm, quiet person generally, but there could be that one thing, which just gets on your nerves. It’s your biggest pet peeve, whatever it may be. As someone of al-Muttaqeen, you control that weakness and you grow and you ask Allah for help in controlling that weakness of yours.

And the fourth characteristic – وَاللَّهُ يُحِبُّ الْمُحْسِنِينَ. Allah says, “those who love to do good”. Allah loves those who do good. So anytime we can go a step above and beyond then we are from the al-Muttaqeen. Those are the four characteristics of al-Muttaqeen.

“And those who, when they commit an immorality or wrong themselves [by transgression], remember Allah and seek forgiveness for their sins – and who can forgive sins except Allah? – and [who] do not persist in what they have done while they know.”

“Every son of Adam commits sin.”

All of the children of Adam will make mistakes and they won’t just make it once, they consistently make mistakes. There’s no one on this earth, any human being on this earth that is living, who does not consistently make mistakes, even the ones who we assume are ‘al-Muttaqeen‘ – they will also make mistakes. They are human beings. We cannot say to ourselves, “I can never attain Taqwa because that is something that is beyond me”. But actually even those who have that Taqwa perform things that they regret, which are فَاحِشَةً – shameful. That’s a strong word – فَاحِشَةً .

‘Astaghfiru‘ – they seek forgiveness for what they have done. So that’s the fifth characteristic and the one which Allah emphasizes with its own verse. The other four characteristics were part of one verse, all at once. And that is not by accident. Nothing which Allah does in His book is by accident.

The other four characteristics, the ones that we usually might assume of al-Muttaqeen:

And so what do they receive?

“…and those people, their reward is forgiveness from Allah and many, many gardens and many Paradises.”

“They’ll stay in those paradises forever and ever, for eternal life.”

May Allah grant his paradise and his forgiveness. Ameen. And help us to be amongst the al-Muttaqeen.

Even amongst us human beings, if I was to hurt my brother and then go to my sister to ask forgiveness for what I did to my brother, it wouldn’t make sense. The sister would say, “why are you coming to me? Go to your brother. What is he going to do if you come to me. Don’t ask me for forgiveness. I’m your sister, go to your brother. You hurt him”.

That is what Allah tells us that. When it comes to human beings, we must go to them for forgiveness. When we harm them, when we injured them, when we hurt them, we must go to them. And this is such an important point which we as Muslims take for granted. Whenever I share this point with non-Muslims, they just think, “Wow, that’s such a great point. That’s such an important thing. Wow. That’s amazing that you guys think of it that way”, as if it’s something so surprising when in fact it’s something which we take for granted. That we have this understanding, this connection to Allah, but that does not forego our connection to human beings. It does not forego the relationships in our family, amongst our friends and so on.

And what is that process of seeking forgiveness?

Number one, you regret the action that you did. If there is no regret in your heart, then that forgiveness is not sincere. There must be regret over this sinful action, which has been done. That is the first step.

The second step is to make some kind of change. If you know that going to this place or hanging out with these people or whatever it may be, has led you to that sin, then you avoid those circumstances. You make changes in your life for those circumstances to not come about so easily.

Then of course, the third step is that you ask Allah for that forgiveness. You don’t assume, but you ask for His forgiveness. Those three very same steps are used with human beings as well. If you’re wondering, “Oh, I apologize to someone, but they didn’t accept it. They were still upset“, maybe these other things have not taken place. Maybe you didn’t show that you were actually regretful. Maybe you didn’t show that this was a sincere apology and not simply lip service. So when apologizing to this person, what did you do to validate their injury, to validate the harm that you caused them?

Did you admit where you were wrong? Did you show regret? It’s the same way Allah teaches us to seek forgiveness from Him. He teaches us how to apologize to human beings. And when we hear this, where does our mind go first? Does it go first to those people who have wronged us? “You know what the person who just apologized to me, they didn’t actually show any regrets.” Or do we first think of ourselves, that there are people who we need to apologize to? Who are the people who we need to seek forgiveness from? Let’s not always be the victim in our own story.

And then of course is the asking of the apology itself and the determination to not fall back into it, knowingly. They’re not determined and stubborn upon the sin while knowing it. So that’s what’s important, my brothers and sisters. If we wish to earn the forgiveness of Allah, we must be forgiving toward others. And that if there is someone who we have wronged, we must seek their forgiveness as well. And that is part of achieving the forgiveness of Allah. Because once we set on that path of forgiveness, then we are on the path which leads to Paradise – eternal life, eternal bliss, eternal happiness, internal contentment, eternal satisfaction.

The Prophet (pbuh) said, “Ar-rahimuna Ya arhamu humur Rahman – those that are consistently merciful, Allah shows them mercy time and time again”. The mercy that Allah has shown you in your life, the blessings that Allah has shown you in your life, they are the result of mercy which you have shown. If you wish to increase the mercy, which Allah shows you, you must increase your own mercy, whether that is towards your spouse, or your children or your parents, relatives, friends, coworkers, towards your neighbors, in whatever form that might be.

Let’s continue working on ourselves: